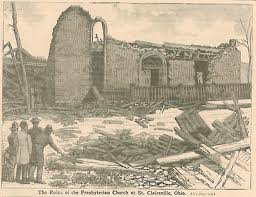 The National Weather Service has stated that there might be a dangerous storm that had worn out entire Cincinnati, Arkansas. The storm spread in seconds over the entire area and caused the death of 3 people also rooted out many homes, and buildings.

Many house lost there roofs due to high speed winds. And power lines were also cut off. There has been a feeding center set up by the American Red Cross in church in Cincinnati. More than 20,000 people had to live without electricity during the blizzard. All power poles were crashed in the stormy winds.

There is an immediate need of electricians and reconstruction work to repair for the damages. People hope power supplies will be resumed by today. An old age couple was found dead in Washington County in their home.

Around five people were critically injured as they were trapped under fallen roofs and walls.

Business was hampered severely in Arkansas with cancellation of flights. Many airports remained closed throughout the storms. There also a lot of debris fallen on the runways on the Northwest Arkansas Regional Airport which needed to be cleared off before resuming the flights.

There was immediate action from the emergency department started in Madison County. Two mobile homes were damaged here and many trees felt down.