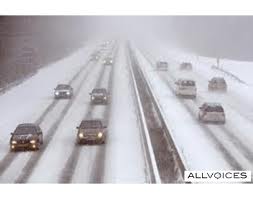 Another blow of cold covers Chicago on Friday night with snowfall. Temperature decreased to minus 12 degree Celsius according to the report by National Weather Service.

The entire northern America has been experiencing severe cold, temperatures much below freezing point and blizzard in different parts of the country. Bad weather loomed over the celebrations of Christmas and New Year too and people were bound to take shelter in their houses in stead of enjoying festivals outside.

Temperature is decreasing in entire northeast  especially in parts of Illinois and Indiana and expected to dip more.

However there will be intermittent snowfall in Chicago. Traffic will be more disturbed due to decreased visibility as per the weather department. The commuters will face more problems due to slippery roads owing to moderate snowfall up to one inch.

The Chicago city administration has fastened its service on the roads for clearing snow and the main route to the city –174 had 40 trucks of Dept. of Streets & Sanitation for monitoring bridges and overpasses to control traffic.

Many vehicles and commuters needed emergency help due to crashes that was caused by minimum visibility. The Illinois police is investigating about around 20 crashes occurred by 8:45 pm on Friday.