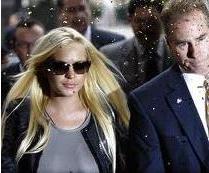 A judge sentenced the actress to 90 days, citing Lohan’s failure to attend court-ordered alcohol education classes after a 2007 drug arrest. Lohan, who has been wearing an alcohol-monitoring ankle bracelet, must turn herself in by July 20 to begin serving the time.

The Judge compared Lindsay Lohan’s apology to “somebody who cheats and thinks it isn’t cheating if she doesn’t get caught.”

It wasn’t clear how much time Lindsay Lohan will actually spend in jail. Los Angeles Sheriff’s Department spokesman Steve Whitmore commented that female inmates convicted of nonviolent misdemeanors serve about a quarter of their sentence but that could be further reduced by state credits.