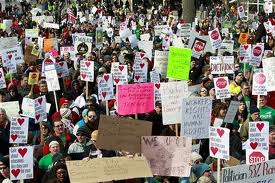 The public unrest does not seem to settle down in Wisconsin. People take on streets demonstrating in the city despite the administrative system coming to a halt. The protests have been continued for last 7 days against Gov. Scott Walker’s plan for raising public employee’s contributions to healthcare and pension. The plan also includes removal of their bargaining rights.

Democrat senators escaped the protests while continuing the legislative procedure to stop voting over the controversial bill.

Bad weather and snowfall forced most of the protestors to remain under shades however; hundreds of them remained unaffected and continues to protest ar at the Capitol rotunda.

People jam-packed themselves the rails to sought slogans against Gov. Walker and his bill for budget-repairing.

The government employees– healthcare workers, the state’s teachers, and others stated that they were ready to provide the financial concessions to the governor but were against the so called union busting proposals, which they loathed.

The strikes are affecting day to day life in the state as teachers and health workers are not returning to work taking medical leaves. Parents of school going children are very worried for students’ studies and said that the Governor’s plan will do no good for any one.