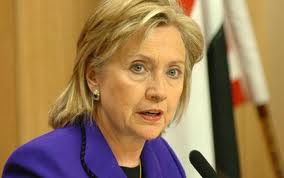 US Secretary of State, Hillary Clinton

U.S. faults Israelis and Palestinians for “demonizing” each other. Hillary Clinton, the secretary of state, United States, stated in a meeting with officials of the two conflicting nations She in Washington and called for efforts for growth.

Mrs. Clinton regretted over the failure of diplomatic talks between the two sides and appealed to stop blaming each other.

She further added that the core issues of conflict–boarder security, settlements, water and problem of refugees and the main center of dispute—Jerusalem between Israel and Palestine needed to be resolved. She asked Israel and Palestine to show accountability for their mistakes and they should be ready to step forward for a peaceful resolution.

The top US diplomat appealed for peace between Israelis and Palestinians for the sake of entire international community while attending a conference of Brookings Institute’s Saban Center for Middle East Policy. Among the listeners, Israeli Defense Minister Ehud Barak and Palestinian Authority Prime Minister Salam Fayyad were also attending the conference.