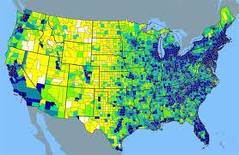 Texas with an increase of 4 million people accounts for largest population among all the states of in the United States, whereas Nevada registered highest growth rate –with 35 percent increase in a decade. Southern and western states showed a trend of largest growth in population and so did the states starting from Northeast and Midwest to South and West respectively.

The trend has been similar in last 40 years. The states with largest number of people have more congressional seats in comparison to states with lower population. California with highest population, therefore stands first in the Congress with 53 seats whereas Wyoming having least population occupies only one seat.

Following the Census results, there will be a significant change in the configuration of US Congress. There are 18 states likely to lose or gain seats in the House. Texas has an advantage of 4 seats while Ohio and New York will be losing 2 seats each in the Congress due to reduced population.