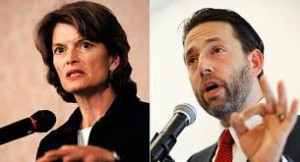 Anchorage:  The dispute over a seat in the US Senate for Alaska has yet not been solved and finally reached to Supreme Curt. Joe Miller a Republican contestant appealed to the Supreme Court against a lower court’s judgment declaring his political rival Senator Lisa Murkowski as victorious.

Senator Lisa Murkowski had started a campaign against Joe Miller following his defeat in the Republican primary polls. Mr. Miller has appealed against Alaskan court’s decision to overrule his challenge to counting of write –in ballots for Ms. Murkowski.

The appealer Miller wants the Supreme Court to nullify poll results and ensure for fair counting of ballots.

Miller’s lawyer Michael Morley, stated that the state court has misinterpreted law in justifying Ms Murkowski’s victory on the basis of write-in ballots.

The state, court however, allowed for ballots that had many misspellings and favored to Ms. Murkowski’s tally To declarer her a winner.

Alaska’ state assistant attorney general, Joanne Grace, justified Mr. Miller’s appeal and stressed that the court should not infer that the will of the Legislature in making the law was to disenfranchise voters.