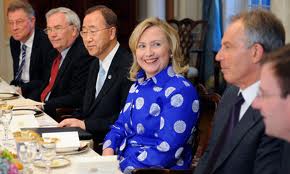 The United States Secretary of State Mrs. Hilary Clinton is full of praises for the opposition forces who gathered in Turkey capital Istanbul to seek for collaboration in ousting of president Bashar al-Assad. Mrs. Clinton who was in Istanbul was proud of what the Syrian People are doing on their own to bring reform in their country.

Sources close to the country reported that tens of thousands of Syrians took to the street on Friday but about 32 of the protesters were killed by the Syrian security forces. Commenting on the protests that was carried out yesterday Mrs. Clinton described it as the largest since the unrest started, he advised the government to hearken to the demand of the people of the country.