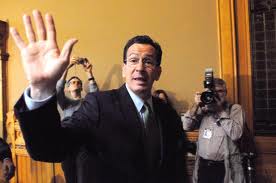 Dan Malloy pledges to make Connecticut free from all financial crises. The 55 year old Democrat leader took oath on Wednesday as the 88th governor of the state.

Inauguration also included an inaugural ball followed by an afternoon parade, salute to the new governor with 19 guns and finally a flyover of aircraft.

Malloy has replaced Republican M. Jodi Rell, governing Connecticut for last 6 years. He  has been the mayor of Stamford and also worked as a prosecutor in New York City In his inaugural Malloy stress on fixing the fiscal crisis Connecticut is going through. He faulted lawmakers for aggravating the problems.

However, he did not mention what steps he plans to take to make up for the fiscal deficit of $3.5 as the plan will be disclosed in next month.

Malloy did not commit for not raising taxes even in the poll campaigns. This gives an edge to his political rivals. However he pointed out that there might be a balanced budget plan combining some tax hikes as well as cuts in services to minimize the deficit.

A senior leader from Republican Party– John McKinney– called Malloy’s plan to increase the taxes a wrong step. He stated that the new governor’s priority should be how to reduce the taxes and not raise them.