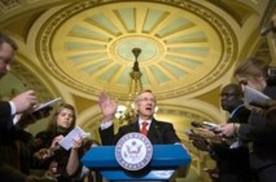 With the opening of new session of the Congress, Democrats attack Republicans. The ruling party now faults Republicans and warns against repeal of the healthcare law and their motives behind obstructing Obama’s way in running the administration.

Since the Democrats are in minority in House, despite being in power, they feel free to criticize Republicans and take avenge of their actions for last two years.

A Democrat leader stated that their new status as minority has made Democrats ruthless toward the opposition party who has been attacking them on every issue Democrats are now feeling free to criticize Republicans, who have gained majority after midterm polls in November.

Republicans are now obliged to justify their objections to make amendments in the repeal legislation and why are they allowing a change that would incur an extra burden of $100 billion to the tax payers.

However, the same was expected by the Republicans. They called it Democrats’ old strategies with which they had snatched power from the former in 2006.

A Republican diplomat– Representative Eric Cantor from Virginia– stated that, Democrats are however, unlikely to succeed this time as people are more aware of deteriorating financial condition of the country owing to Obama administration’s wrong decisions. Unemployment is another major reason to keep people unhappy with Democrats’ performance, he further added.

Democrats called their demonstrations as way to inform public about hypocrisy of Republicans and their vested interests.