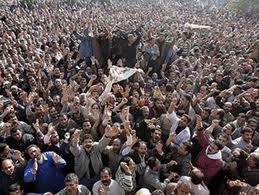 Thousands of people in Egypt are demonstrating in Alexandria demanding ouster of President Hosni Mubarak..

At Alexandria’s Qaed Ibrahim mosque, tens of thousands of people had assembled on Friday to demonstrate against the president.

Excluding a single dispute with a security official, the demonstrations were non violent and there was nobody hurt during the mass protest.

There were thousands of people from opposition Muslim Brotherhood movement.

Other major groups participating in the protests were Kefaya (Enough), 6th April movements and fans ofMohamed ElBaradei, who is an Egyptian Nobel Peace prize winner and a popular protester.

More than 25,000 protesters gathered at Raml near Alexandria before marching to Sidi Gaber square in the main port city.

There have been many huge rallies organized continuously everywhere in Egypt against Hosni Mubarak in last 11 days demanding his exit in Cairo and other main cities.

President Mubarak has however tried to compromise with the demonstrators offering some concession however the protesters are rigid over asking him to step down and end his 30-year long rule in Egypt. They also plead Mubarak for not standing in the September elections.

International community, the United Nations and major superpowers of the world are continuously pressurizing Mubarak to step down; however he has not shown any willingness to follow the same so far.