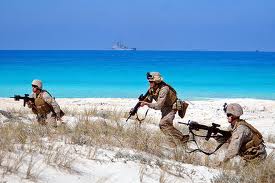 Egyptian security officials have seized many explosives, ammunition and arms hidden by Palestinians a warehouse facility in desert reportedly. The Egyptian force found a large store of ammunition that was meant to be smuggled to Gaza Strip from Sinai Peninsula and other adjacent areas.

The seized weapons include many anti-aircraft artillery shells and anti-aircraft missiles, reportedly the arms were to be smuggled to Gaza strip via tunnels. The security forces have destroyed many tunnels after firing on Israel across border with rockets and missiles

Nine weapons store were found in Sinai Peninsula prior to this in Rafah, El-Arish and also in northern and central part of the peninsula. All of them were stored and hidden in Sinai for smuggling into Gaza strip for Palestinians.

The security personnel of the Egypt revealed that there were machine guns, ammunition, 90 artillery shells, bullets of various sizes that counted 200 in number and several anti-tank landmines. There was also 100 kilograms of TNT found on the site. All ware houses are located in an isolated desert and security persons could not find anybody to interrogate regarding the ammunition found. The Egyptian authorities suspect more weapons hidden in Sinai Peninsula and they are looking for it.