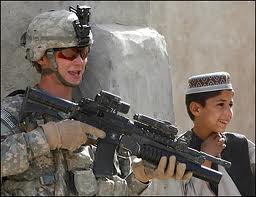 US soldiers in Afghanistan

Washington: Just before the release of a review of US strategy in Afghanistan by President Obama, two new intelligence reports have revealed an assessment that completely refutes the US claims of progress in the 8-year old battle in the war-torn country.

The reports have further assessed that there is a bleak chance of success on Afghan land and the role of Pakistan will be critical in the entire episode since it is to be seen whether Islamabad is able to wipe out terror havens operating within its territory.

The reports, however, say that there is some sort of developments in Afghanistan situation, which is a sign of limited success for US and allied forces, but the reluctance of Pakistani government to take action against terrorists in its tribal areas remains a serious issue. US officials have been saying for too long that terror outfits freely operate within Pakistan and cross into Afghanistan at their will to launch war against American troops.

Meanwhile, senior Pentagon officials have termed the reports on Pakistan and Afghanistan as baseless and out of date and said that the reports have been compiled by Washington-based analysts who have not spent time analyzing the ground reality during the war in Afghanistan, and have no feel of the situations in these parts of the world.

The debate, however, between the military and intelligence officials shows the seriousness over the Afghan policies which is basically moving around the fact that whether the United States can succeed without Pakistan’s help in the war on terror.