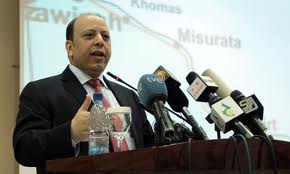 It would be recalled that NATO forces had targeted warships that are within the ports and destroyed them. These ports where the warships were destroyed were in Tripoli. The NATO said that the attack was good because Gadhafi is using it to deploy mines using the naval ships. The spokesman said that the attack was in order to stop Gadhafi from using the naval might against the people.

The Libyan government accused NATO of violating the UN resolution which prohibits the use of dangerous weapons against the civilian population. However the NATO spokesman said that it is not true that they used dangerous weapons adding that there was no repot of any loss of live.

He stated the attack was justified. He said that Gadhafi is using dangerous weapons against the civilian population. He said that he has been laying mines which eventually end up killing some people especially in Mirada and some other parts of the country.