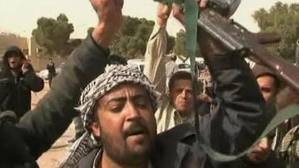 Pro-government security forces in Libya have been accused of violating human rights in suppressing the rebellions who demanded ouster of Gaddafi government. The security forces were found using cluster bombs according to a human rights group. These bombs are prohibited in more than 100 nations of the world.

Human Rights Watch stated that there were projectiles found being launched in Libya that exploded near Misrata in Libya. However the administration denied the allegations.

The international Convention on Cluster Munitions which was adopted in Dublin by the international community in 2008 bans its 108 signatories from using cluster bombs due to its severe impact on human lives.

The Gaddafi-supporting security forces are continuously pushing rebellions out of their strongholds and Misrata is the only city left in their hands so far.

According to a report, Misrata residents are scared of a possible massacre in case they do not receive immediate help from the NATO-led international security forces

The meeting of global diplomats in Berlin, which was led by NATO ministers, did not reach any commitment over contributing warplanes.

The US, UK and France expressed in a joint statement that without forcing Gaddafi to resign, it would not be possible to safeguard the life of Libyan people. Russia urged NATO not to go beyond UN Security Council’s mandate for protecting Libyans.