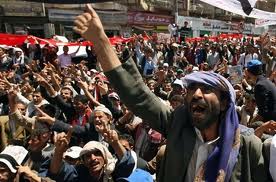 Protesters are insistent on criticizing the breach of deal between the Gulf Cooperation Council and the Yemeni President and they fiercely demonstrated against the later. They warned the President that killing protesters would make it impossible to proceed with the deal.

The demonstrators issued this warning following the murder of 13 rebellions in Sanaa and one in Aden by the pro-government security forces. Around 100 protesters were injured in the clashes with the security forces.

The statement issued by the opposition demonstraters said that they had accepted the Gulf deal in hope to stop blood shedding, but the government has yet not stopped killing innocent peopleagitated them.

The opposition members feel that the Saleh government is using GCC deal to kill Yemenis and they would never accept the same if the massacre does not stop soon.

The deal is yet to be finalized and signed by the Yemeni government and the opposition members. The GCC proposal includes a transfer of power from Saleh to his opposition within 30 days of signing the deal  in exchange, Saleh and his supporters would be provided immunity.  There is also a condition of formation of new unity government within 7 days after Saleh’s resignation.

The GCC refers to six oil-producing nations in Gulf region, which have been working together to establish peace in Yemen.

However, the international human right group—Amnesty International opposed the proposal of providing immunity to Yemeni President and his supporters who are involved in brutal massacre of innocent people.

Amnesty International’s director for the Middle East and North Africa, Malcolm Smart stated that Saleh should not be allowed an escape from punishments for the human rights crimes he committed—torturing Yemeni civilians and killing them.