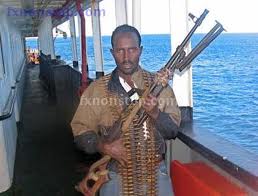 Pirates of Somaliland waters have captured a South Korean freighter with 21 members of crew in the Arabian Sea, revealed the Seoul Government.

The ship carried 8 South Koreans, 2 Indonesians and 11 people from Myanmar. Weighting approximately 11,500-ton the ship was hijacked by sea robbers on Saturday. The chemical carrier named as Samho Jewelry started its journey from the United Arab Emirates to reach Sri Lanka.

South Korean foreign ministry stated that their officials were trying to negotiate with the pirates.

A Danish cargo ship, the MV Leopard, was also was attacked by the Somali hijackers recently in the Arabian Sea. They abandoned the ship later but all the passengers on board and crew members were missing. Among the missing people4 were from Philippines and two were Danish crew members.

Somali pirates had hijacked another South Korean ship also in November namely–the Samho Dream. It was a supertanker, and carried 24 crew members out of which — five were South Koreans and 19 from Philippines. However, all of them were set free after seven months.

Officials were trying to all people on board on Samho Ship but got no answer on Saturday.

Somalia has been notorious for its crime and pirates have dominated over the Somalia water and its territories. There is no functional government in the country since 1991.