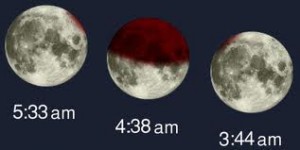 Lunar Eclipse as predicted in December

There will be unique phenomena in the space this year as winter solstice will correspond with a full lunar eclipse.

The occurrence of winter solstice with lunar eclipse will be for the first time in last 456 years.

As NASA reports, this will be first time since 1955 when winter solstice, which is the shortest day in a year will coincide with a lunar eclipse.

Another lunar eclipse had occurred this year on 26 June. Many astrologers and scientist are regarding this incident very special. Many ancient cultures considered winter solstice as a time of revitalization. Many Greco-Roman customs and rituals were performed on occurrence of winter solstice, as it was considered an auspicious day.

Shane Hawkins a university professor in Greek and Roman studies at Carleton University in Ottawa stated that astrologically a solstice in winter is considered a time for rebirth because sunlight reverts back from this point of time and days starts becoming larger every day. People might feel overwhelmed with excitement if the coincidence of winter solstice and lunar eclipse really occurs on December 21.

People in North and South America will be able to see the lunar eclipse post midnight on Tuesday. The eclipse will be visible till 5:30 am. It will be visible in Europe too but for  a very short while.