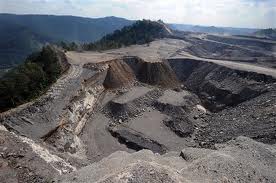 US environmental agency repealed permit granted to the largest surface mine, that producing 10 percent of the total coal for US.

Spruce No. 1 coal mine, which is owned by Mingo Logan Coal Co.in West Virginia. The 2300 acre- mine has been in disputes since 1998.

The Environmental Protection Agency or EPA’s new decision to revoke grant from coal mine is likely to hamper many other projects too as they come under  ‘mountaintop removal’ a concept, unacceptable under agency’s new law.

The US administration had granted permit to coal mining projects during Clinton and Bush era, however the new guidelines have been implemented in April and therefore all previous permits are under revision.

Peter S. Silva, an official from the EPA stated that Spruce No. 1 coal mine, has been engaged in destructive mining practices that had affected the health of communities living nearby in Appalachian mountain region.

Spruce No. 1 coal mine has a capacity of employing250 workers and it could produce 44 million tons of coal in next 15 years had it’s permit not been taken. But theSection 404 of the Clean Water Act – implemented by the EPA has put a barrier on it. Experts call it a hard decision of the Obama administration that is likely to hamper future investment in mining.