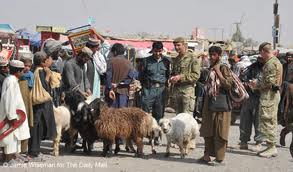 US expresses confidence that the security situation is finally improving in Afghanistan.

The United States consider its strategies are ‘working’ in Afghanistan. Robert Gates, US defense secretary, Robert Gates stated while addressing American troops in the country and hoped that the troops could be pulled out by 2014.

Gates accepted that more soldiers were being killed from both NATO and Afghan forces but assured for improvement in security situations.

Gates expressed his optimism regarding Afghanistan while addressing a press conference in Kabul and predicted that the American troops might achieve their goal in coming few months and situation may improve in near future. The Afghan war has cost too much to the United States in terms of number of soldiers killed as well as money spent on military expenses. The Bush administration was highly criticized over its reluctance to pull off American forces from Afghanistan. Gates expressed regret over the casualties both NATO and Afghan forces suffered so far and said that their sacrifices would bring safety and security to the US and Afghanistan.

The NATO forces are losing their global support base gradually due to prolonged war in Afghanistan due to rising death toll. The Americans have paid too much for their campaign against terrorism or so call ‘war on Terror’ envisaged by former President George Bush.