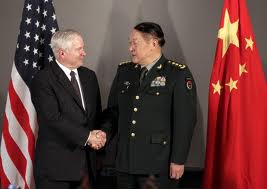 The U.S. Defense Chief Robert Gates agrees to his Chinese counterpart to enhance military cooperation between the two nations.  However, the two delegates remained stubborn over the issues of Taiwan and Chinese ammunition.

Gates and Chinese Defense Minister General Liang Guanglie stated that they are heading toward strengthening military cooperation but the two issues of conflict remained unresolved regarding Taiwan and China’s continuous efforts for modernizing military power.

Gates is on a three-day visit to China. He has also offered Guanglie to visit Washington and discuss nuclear posture, cyber warfare and missile defense.

The US could, however only convince the Chinese diplomat for a strategic dialogue with Chinese military leaders.

Robert Gates also aimed to get some deal over military ties in this visit and expressed this while talking in a joint press conference with Chinese defense minister Gates further stated that the two nations acknowledge the need to minimize misunderstandings between the two countries and establish strong cooperation ties.

However, the Chinese authorities seemed to be interested more in smoothening bilateral relations right now prior to Chinese President Hu Jintao’s visit to Washington.

Liang made it obvious once again that China would never support US for providing weapons to Taiwan. US had recently sold arms worth $5.4 billion to Taiwan following which China showed its displeasure strongly and discontinued military cooperation.