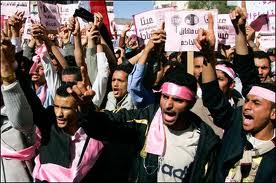 Anti government demonstrators took to the street much like Egypt and Tunisia. They shouted for economic and political reform. The ouster of President Abdullah Saleh was a part of the demand.

President Saleh who has been in power for 30 years refuses to step down. But his offer to have a national dialog on issues has been accepted by the opposition.