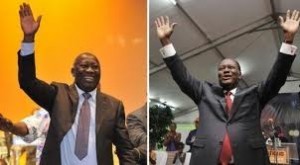 Gbagbo(L) Ouatarra (R): both claimed the presidency in polls after civil war

The Economic Community of West African States (ECOWAS) appealed to Ivory Coast’s President Laurent Gbagbo to resign, and avoid ‘unnecessary bloodshed’ in the country. There were violent clashes in Ivory Coast following Gbagbo’s denial from stepping down on Thursday and many protesters were killed.

Sonny Ugoh, ECOWAS communications director stated that there was an international consensus to pressurize Ivorian president to resign from the post and give power to the former Prime Minister Alassane Ouattara.

The ECOWAS official justified the demonstration by the supporters of former Prime Minister Ouattara unless they were violent. He said that the government of Ivory coast should not suppress people’s right to demonstrate. A senior official of the US State department revealed that the United States would impose sanctions against Mr.  Gbagbo if he continued to deny from resigning. France and the African Union have also issued similar warning against the Ivory Coast president for his undemocratic behavior.

More violent protest followed the warnings by different countries. There were clashes between the pro-Gbago troops and Ouattara supporters in the city of Abidjan and also in the central Ivorian city of Tiebissou, leading to death of 30 people reportedly.

Mr. Ouattara appealed to his supporters to take hold of administrative buildings which were still under control of Mr. Gbagbo.

President Laurent Gbagbo and former Prime Minister Alassane Ouattara  both declared themselves as winners in the previous polls after the 2002 civil war. The voting was done in order to reestablish peace in Ivory Coast after the civil war.  The ECOWAS official feared that the current crisis might hamper the economic development in the entire West African region.