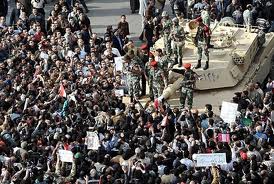 Despite international pressure to step down, the Egyptian President Hosni Mubarak is not ready to give up so easily. Following the huge mass protests by the opposition groups and violent clashes between supporters and opponents of the president, the United States and many other countries are urging Mubarak to settle for surrendering and not fighting next elections.

In stead of resigning, Mubarak has reshuffled his cabinet recently and appointed Intelligence Chief Omar Suleiman as deputy president to show that he was not affected by the chaos. The Egyptian president still holds control over military with the help of which, he is trying to suppress protestors. Thousands of opposition members have been arrested for demonstrating against Mubarak to restore normal situation in Cairo. The president has also imposed emergency law in the country.

The United States is continuously trying to persuade Mubarak to step down and allow immediate political change after 30-year one man rule. However, Hosni Mubarak has warned against attempt to enforce swift changes in Cairo’s politics and stated that it might lead to chaos in the country.

The United States is perplexed in its own dilemma. The White House has always been a supporter of Egypt and facilitated it with billions of aid assistance. The recent change in its stand against President Mubarak has made the future of US-Egypt relations quite uncertain. This might also be taken as a warning notion for all the autocratic rulers in the Middle East.