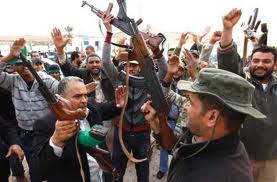 Ras Lanuf, Libya:  – The United States supports Arab League’s demand for declaring Libya a no-fly zone. The White House calls it as an important step in the wake of government’s effort to root out rebels from the areas they controlled.

Amr Moussa, chief of the Arab League stated that the League, had determined on Saturday in a meeting in Cairo that Libyan President Gaddafi had done serious crimes and taken violent steps against the people of Libya. The league therefore considers Gaddafi’s government as illegitimate and pressurizes Mummar Gaddafi to step down.

The United States would play a vital role in implementation of making Libya a no fly-zone. However it had not made any commitment yet to take any military action against Libya.

It is yet to be clarified whether League’s decision to declare Libya a no fly zone would give any support to NATO on regional level in initiating any military action against the country. However, William Hague, foreign secretary of the UK called it “very significant”.

The US authorities also indicated over possibility of an urgent meeting of the UN Security Council over this issue; however they said it was not very likely.

Gaddafi’s suppressive actions against his opponents have led to unprecedented unrest in the country. Ouster of autocratic governments in many other nations in the Middle East in recent days has inspired people of Libya to speed up demonstrations against the suppressive rule of Gaddafi.